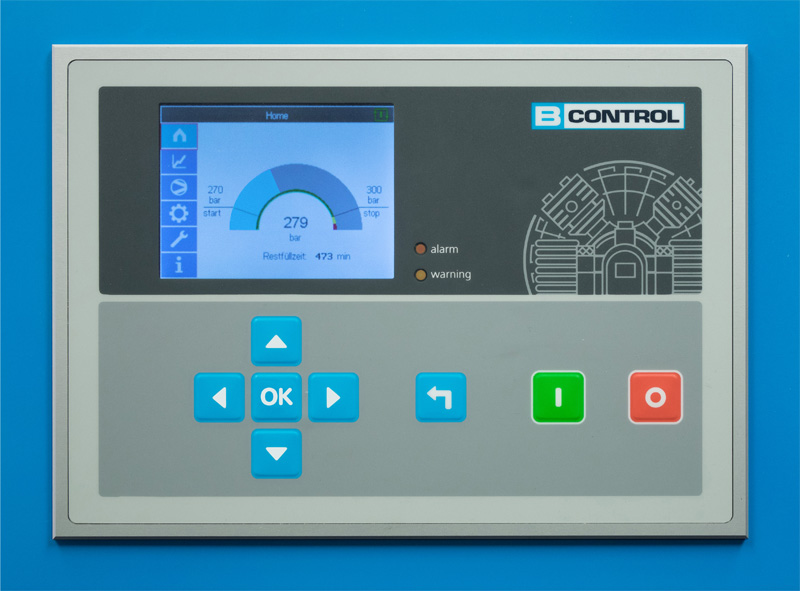 The main improvement to the B-CONTROL MICRO control unit is immediately obvious as soon as the compressor system powers up and the unit's new crystal-clear 3.5" TFT colour display comes to life: The redesigned user interface of the B-CONTROL MICRO is clear, modern and uncluttered. An enormous support for users is the unit's graphic display, presenting a fast, comprehensive overview of the main parameters of the system such as oil pressure and temperature. All information and system messages are now displayed in free text format, with a choice of menu languages and optimised menu structures to allow rapid, intuitive navigation.

When BAUER KOMPRESSOREN developed this new interface, they also considered the situation of operators waiting impatiently for their compressed-air bottles to fill. By integrating the remaining time to fill into the display, BAUER has raised the bar for convenience and user-friendliness.

Further improvements to system operation too:

The B-CONTROL MICRO control unit is now enabled for a function previously reserved for its "big brother", the B-CONTROL II: the unit allows compressor systems to be interconnected for tandem operation. It can also be used to connect external signal transmitters and external displays. And a further new feature that enhances convenience for users is a display of the remaining time to reach final pressure - both in graphic form and figures.

BAUER customers will be pleased to find that despite the upgraded display, new interface and expanded scope of features, the price of the new B-CONTROL MICRO has stayed the same as its predecessor!