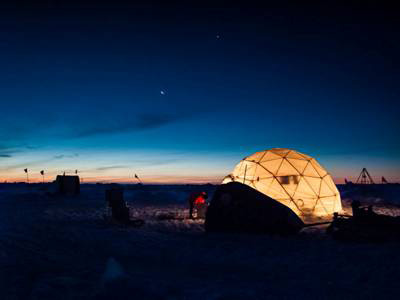 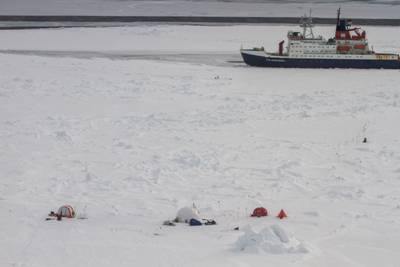 Latest news from the Polarstern expedition

The recent period has been crammed full of work projects and there's been little time to do even the essentials, write emails or answer them. Things have been somewhat less hectic today and work on the ice was completed yesterday with an exciting yet tiring helicopter operation and all the materials were transported away as the floe started breaking up and formed cracks everywhere next to our ice camp. This enabled us yesterday to send 12 people onto the ice to tie up, dismantle and package all the tents, igloos, diving equipment, etc. so that the helicopter was then able to fly back because our route back across the ice was already partially blocked by cracks of several metres wide. Phew !! – A lot of hard work – the mulled wine later on deck in heavy snowfall helped relieve the stress of the day and with guitar music from Torsten and Sven, the evening ended – or I should say – the morning began?

But now in order –  following long helicopter flights last week we located a suitable ice floe with a mixture of old, thick ice and new ice of about 80 cm, seeing the start of an exhausting period. The work was made more complicated by unusually high snow cover, so that sometimes we sank down to our hips and every step became hard work.
The equipment prepared during the weeks beforehand (igloos, tent construction, generators, safety boxes, etc.) were lifted gradually by crane onto the helideck and flown to our position around 500 metres from Polarstern. In parallel, a team explored a safe access route to be able to use the sleds and skidoos. After 2 days of hard work, the camp was finished, generators were running, light was burning in all tents and igloos, the five diving and safety holes were drilled with the excavator using a 90cm drill (a story in itself) and the diving operations were able to begin again as planned.

What we saw underwater was breathtaking – infinitely clear deep blue water, an indescribably beautiful underwater landscape with deep jagged icebergs, ice caves and – most importantly: thousands of krill larvae, dancing like mosquito swarms around ice formations and eating algae –  we reached the destination for this trip, everyone was transfixed by the sights and we began the documentary recording of transects, video documentation, regular dives at different times of day, etc. We were well fed at lunchtime with delicious stews from the galley and sat packed close together but happy in the tiny, warm igloo to eat. We had regular visits from curious colleagues and the film crew on board barely left our side – there were cameras on all possible supports in the water to accompany our work.

The temperatures were also bearable – it was rarely below -10°C, although the wind was violent at times – but in our dome dive tent we were perfectly protected. It was an exciting time with experiences that barely left me time to sleep and that have also meant that I'm sitting here at 03: 30 ship's time to write a first email. In the next few days, there will certainly be more and more personal answers ... sorry for the slow replies to so many emails.

...at present we're steaming about 200 miles to the east to look for a new, different ice floe in a different area and area of water ... then the procedure starts again - it's hard to imagine that what we've already experienced will be topped ...
This coming Saturday we'll be celebrating the halfway point with barbecues on deck ...

All the best from our ship breaking onwards through the ice,

You can also track the journey at www.fs-polarstern.de.