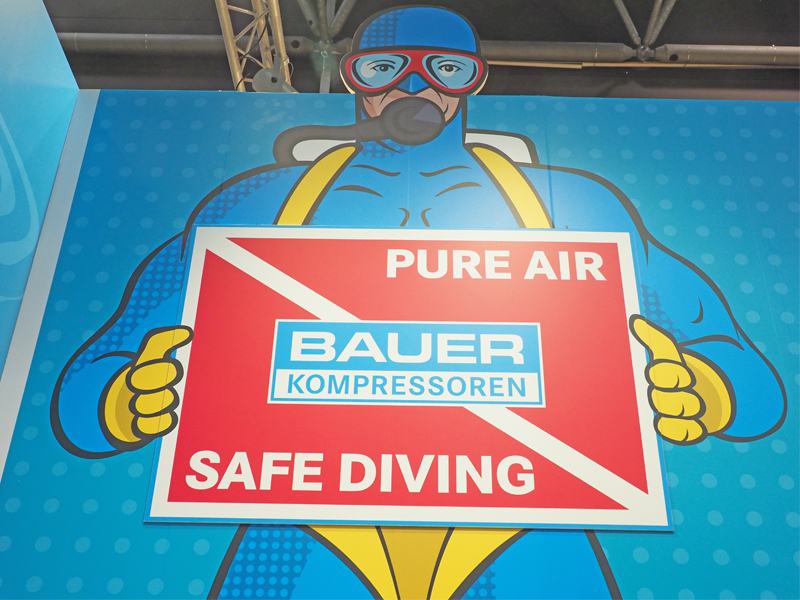 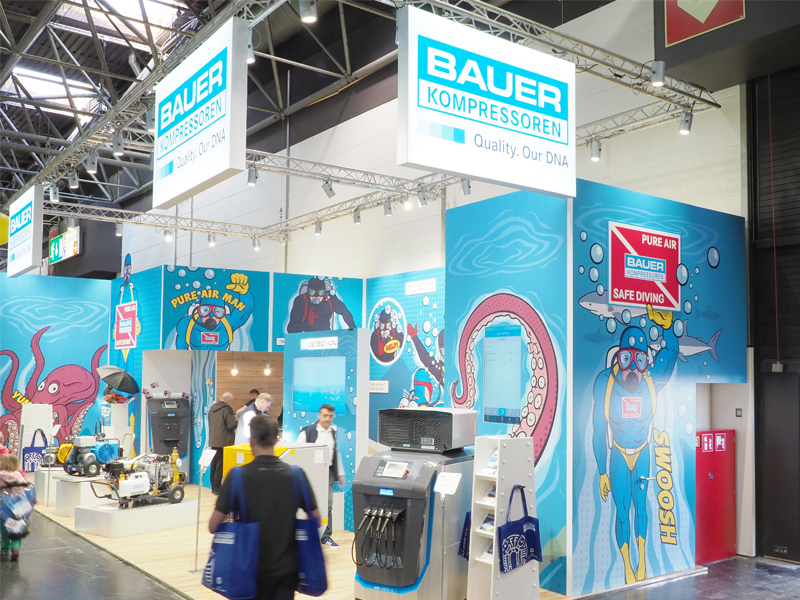 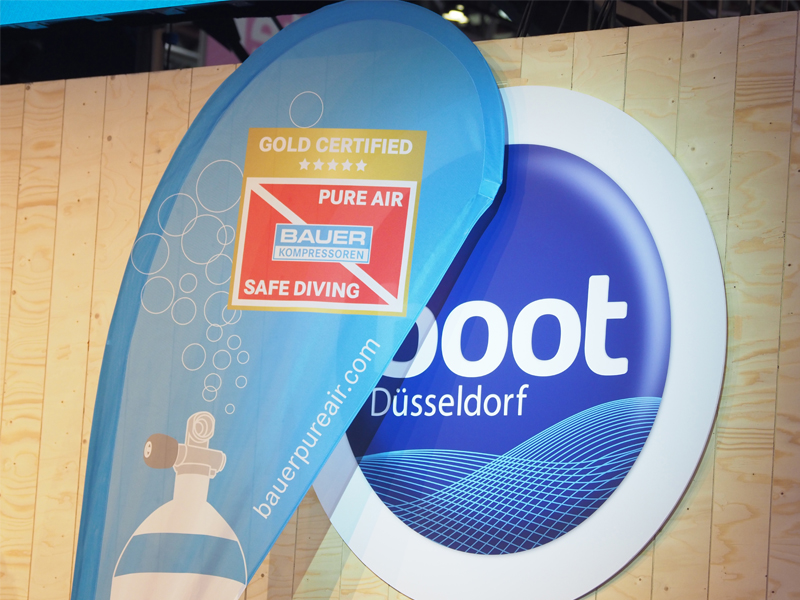 BAUER at the 2019 boot Düsseldorf

At the 2019 boot Düsseldorf exhibition, BAUER’s stand in Dive Hall 3 was the most eye-catching display by far. Designed in striking comic style, the stand focused on the topic of air quality  and chose to tell it in a story: a diver who has breathed contaminated air is saved from the depths by BAUER “PureAirMan”, a superhero fighting for pure air.

BAUER, the world’s leading producer of compressors for use in diving applications, supplies products that deliver high-purity breathing air in compliance with the strict terms of the Breathing Air Standard, DIN EN 12021:2014. This breathing air is the most important part of the diver’s equipment, without which expeditions to explore underwater worlds would be impossible. Ever since the first diving compressor was developed, BAUER’s paramount aim has been to ensure uncompromising quality. This is mainly achieved with the help of flawlessly functioning purification systems.
Unfavourable ambient conditions can cause hazardous carbon monoxide (CO) or carbon dioxide (CO2) to enter the compressor in the intake air. Unlike moisture or oil, for technical reasons these substances cannot be removed from the air by the purification system.
To address this problem, BAUER developed B-DETECTION PLUS, an advanced online gas measurement system which immediately detects any exceeded limit values while scuba tanks are being filled, and shuts off the compressor to ensure absolute safety. In parallel, the new BAUER PureAir Gold Standard forms the central criterion for continuous air monitoring by the B-DETECTION PLUS system. It was debuted at this year’s boot Düsseldorf exhibition.

In a further world premiere, the boot Dive Center was the first centre in the world to receive PureAir Gold certification. The certificate was ceremoniously presented on the Dive Center Stage. The system had previously been installed and the breathing air quality produced at the Dive Center was thoroughly analysed. At 11 am, Hubert Sinzig from the authorized BAUER dealer, HubSys Airtec, joined Ralf Deichelmann from BAUER KOMPRESSOREN on the Dive Center Stage to present the certificate to the head of the Dive Center, Alex Lamers. As in previous years, BAUER KOMPRESSOREN was again providing the air supply for boot Dive Center in the Dive Hall. One hundred per cent compliance with limit values was ensured by the new gas measurement system, B-DETECTION PLUS. As an interesting extra for visitors to the Dive Center, filling operations by the VERTICUS breathing air compressor could be tracked through a large window throughout the exhibition. This proved to be a magnet for watchers and attracted constant attention.
Laura, the project manager for the BAUER stand from Platzer Communications, was so inspired by the atmosphere at boot that she immediately slipped into a diving suit and gained her first experience of diving at the Dive Center taster pool – naturally, with the help of breathing air from BAUER. She loved it! Looks like her next holiday will be a diving break…

To focus the attention of the diving scene on the importance of breathing air quality, the BAUER stand showed a brand-new animated video that captures the significance of pure breathing air in a concise and memorable way. The film is universally available at (https://www.youtube.com/watch?v=MJnB21LR6nA) and is designed to be used by diving associations for training purposes in future. Complementing the main topic, two activists from the non-profit organisation ReefCalendar (https://www.reefcalendar.org/) received stunning body painting by artist Gabriela Hajek-Renner; in the characters of a reef creature and PureAirWoman, they distributed information leaflets on the subject of breathing air.

In terms of products, BAUER presented B-DETECTION PLUS m, its new measurement device, with the “m” naturally standing for “mobile”. BAUER has succeeded in designing a convenient version of its state-of-the-art stationary breathing air measurement system in a compact carry case. The new mobile system allows all users to reliably measure breathing air wherever and whenever they want.
Another brand-new product making its debut at the 2019 boot Düsseldorf was the PE 200 TB compressor from the POSEIDON EDITION line, providing divers with mobility and freedom. The “T” and “B” in the name stand for the German words for “portable” and “petrol” – summing up the benefits of the PE 200 TB, which is powered by a rugged Honda petrol motor. Complete independence from mains power, for operation anywhere in the world.

As every year, Thursday evening at boot Düsseldorf was reserved for the Dive Awards. Everyone who is anyone in the diving scene always saves this date – the annual highlight of the exhibition. Once again, BAUER was the main sponsor of the mega-event. Like the famous “Oscars” ceremony, the diving products, diving associations and diving operators and promoters that had gained the most readers’ votes were called up on stage and presented with the bronze dolphin awards. This year, BAUER’s sponsorship commitment focused on the concept of pure breathing air –and more precisely, the new PureAir Gold certification.